Shein and Romwe also had products wrongly marketed, while one item marked ‘cruelty-free and vegan’ was made of fox skin

Sellers on shopping websites including Amazon and eBay have been leading British consumers into buying real fur wrongly advertised as faux, an investigation has found.

Hat pompoms, charms, keyring chains, jewellery and clothing motifs described as faux fur by sellers turned out in laboratory tests to be fur from foxes, mink, raccoon dogs and rabbits.

And shoppers are being warned to be vigilant when buying items that look like fur, even when marked as “cruelty-free and vegan” after one item with this description proved to be made from a fox pelt.

The investigators, from Humane Society International/UK, said Covid-19 restrictions meant more people were shopping online so could not touch or closely look at items before buying, and were entirely reliant on retailers’ descriptions.

A £13.99 beanie hat bought from a seller on Amazon UK had a pompom described as “man-made faux fur” that laboratory tests confirmed was real fur; and an eBay retailer sold a pair of £16.99 “faux-fur fluffy sliders” that also turned out to be real fur in tests.

China-based fashion site Romwe was found selling a real mink fur bag charm for £2.50 sold as “100 per cent faux fur” and an £88 “faux-fur hooded coat” made with real fur, which HSI experts suspect was fox or raccoon dog.

Shein, also Chinese-owned and one of the world’s largest e-fashion stores targeting “generation Z” shoppers, was found selling a £2.49 “faux fur” keychain that laboratory tests confirmed was real mink fur, as well as Christmas “faux fur” pompom earrings for £2.49 and a flamingo-motif sweatshirt with “faux fur” detail for £10.99, both of which were real fur.

Another online retailer was selling a £15 diamante hat described as having a “faux-fur pom” that was even labelled as real fur when it arrived in the post.

One site sold £10 “faux-fur-trimmed” gloves that were real fur, thought to have been rabbit; and another site sold sliders marketed as “made of voluminous vegan faux fur and 100 per cent cruelty-free” which laboratory tests confirmed were real fox fur.

This is the sixth consecutive year that investigations have revealed animal skins used for items from shoes and slippers to hood trims described as faux, misleading buyers.

HSI says conditions on foreign fur farms are so poor, with animals often having to endure “appalling deprivation” that their fur is produced as cheaply as - or even more cheaply than - faux fur.

Claire Bass, executive director of HSI/UK, said: “In 2018 a Parliamentary inquiry was held to hold companies to account; we’ve even had the Advertising Standards Authority and Trading Standards issue warnings to companies.

“Fur is cruel which is why most Brits don’t want to buy it.”

Fur farming is banned in the UK, but the country is complicit in the cruelty because imports of animal fur are legal, she said.

Denmark, which HSI says is the world’s second-largest fur producer after China, last month ordered a cull of all its 17 million mink after outbreaks of coronavirus among the farmed animals.

Before then, it was estimated 60 million mink were farmed for their fur in 24 countries around the world. 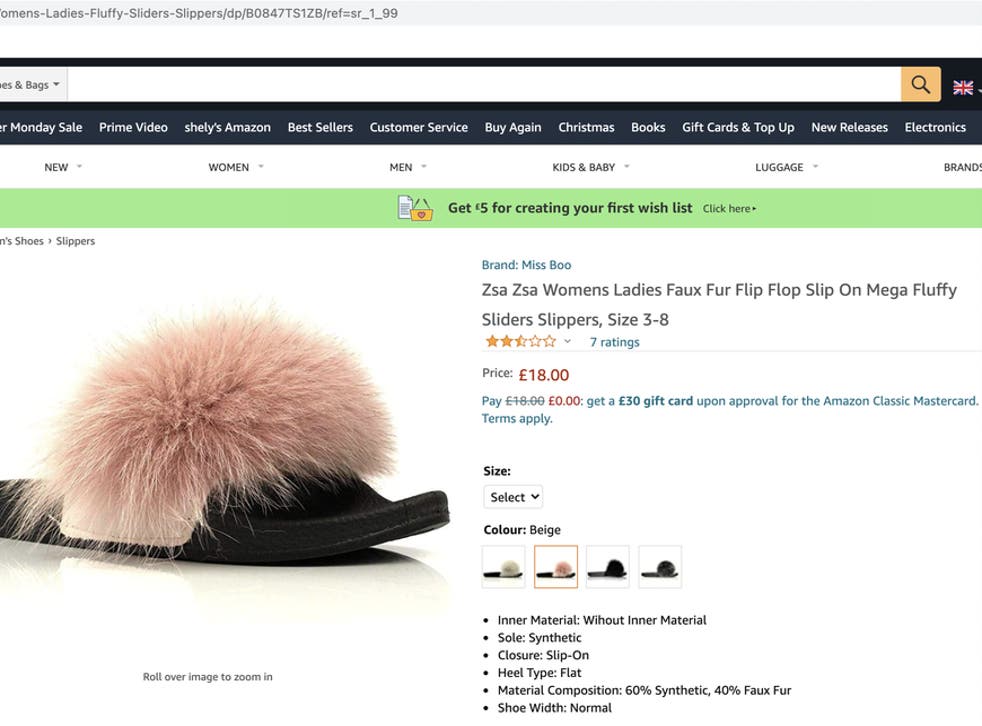 An Amazon spokesperson said: “Third-party sellers are independent businesses and are required to follow all applicable laws, regulations, and Amazon policies when listings items for sale in our store. We have proactive measures to prevent prohibited products from being listed and we continuously monitor our store.

“Those who violate our policies are subject to action including potential removal of their account. The products in question have been removed.”

An eBay spokesperson said: “We’re sorry to hear that a seller has been misleading buyers in this way. We regularly communicate with sellers to ensure they are clear on our selling policies and practices, and in this case we will take the appropriate action.”

The spokesperson added that as the item was not as the seller described, any buyer would be eligible for a refund.

The other retailers involved have also been contacted for comment.